How many years have you been part of the Summer Symposium?
This is my 38th camp, I started in 1981. I’ve only missed one year when I first started my job in Southeast Louisiana, but I’ve been back every other year since then.

What keeps you motivated to come back year after year?
The kids! It’s always the kids. I know I get older every year, but the kids stay the same age and I just soak that energy in. I get to see a lot of my friends that I’ve taught or judged with and met through this organization. Really this camp is the only time we get to see each other, it’s like a reunion. The Music for All family is full of great people and it just makes it really good to be back.

What is the coolest/most unique part of being camp director?
It’s unique and sad. L.J. Hancock was a band director in Pittsburg at Norwin High School. I was fortunate enough to room with him back in the ‘80s in the Whitewater days. We started out as SWAGs and then moved on to teaching percussion. The camp grew so big that I was appointed the Assistant Camp Director and he became the Camp Director. Tragically he passed in the winter of 2002 which broke all of our hearts. I was asked to fill his shoes and become the Camp Director. At first, I was hesitant because he was such a legend in this activity. I was honored and nervous. But that experience of attending the first opening session as Camp Director was such a thrill that I will never forget. It was just overwhelming. Not only was the cheering loud, but you can just feel the energy pressing against you. That is a rush that I’d never felt before, and it’s the same enthusiasm 17 years later.

What does the mission of Music for All to create, provide, and expand positively life-changing experiences mean to you?
Every kid should have an opportunity to experience music. Just like I think every kid should have the opportunity to experience sports. I know that in our world, that is a tough pass, but I truly believe that Music for All is making a dent in providing that opportunity for a lot of kids who would never have had that opportunity before. I believe their mission and I know and understand their mission is a hard one. And I know that on the outside people looking in may think “yeah right, that’s impossible”. Well you know what I say to those people? I’d say it seems impossible to build a railroad, build an airplane, or go to the moon. It’s a process, and at times a slow process. It takes a lot of people and resources to see what you guys are doing and to get behind you to make it possible, but it is absolutely possible.

What advice would you give to students who are attending the summer symposium?
To a new student, be prepared. Coming into a camp of this size can be intimidating because you’re around campers who have been here before and have experience at camp. Make friends. We are one huge family. Don’t be afraid to ask a question. Don’t be afraid to shake hands with someone you think may be a legend in this music world.

To the returning students, they get it. They wouldn’t be back if they didn’t get it. To them I say keep pushing, keep soaking it up, keep learning. And most importantly I’d say to them to take care of the new campers and those around you.

What does life look like for Norm during the school year?
I haven’t been a band director in 25 years. After I left band directing I became involved in transportation. I worked for a company that did charter service. Another guy and I decided to branch off and do the same thing and make improvements to serve our community better and 20 years later we are still rocking and rolling up and down the highway!

What are you most excited for this year?
There are so many things that I like about this. I love the dance party and the nightly concerts. But probably what I like the most is when the marching band performs with Carolina Crown and on Saturday when everyone gets to “show off” to their family and friends. Just to see the looks on their faces is so cool. When they come off that performance stage you can feel the energy and that is just amazing.

When you see Norm on his decked-out golf cart make sure to wave hello! We can’t wait to see you! 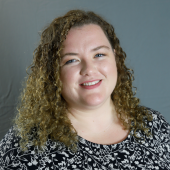 Jessica Morgan is a Marketing Coordinator with Music for All and has been a part of the team since February of 2018. Her main focuses are managing print media, blog content management, social media coverage, scripting and design. She graduated from Indiana State University with a degree in Music Business and a concentration in Marketing. In the past she has worked with the Terre Haute Symphony Orchestra, Indianapolis Symphony Orchestra and Paige’s Music.

It All Started in a Waffle House…

Saturday is Family Day at Camp